Lockdown 2 is due to come into force on Thursday because of the pandemic. I drop in on friends in the afternoon as it will be my last chance to see them for weeks. Stephen asks his daughter, aged 3, “who’s going to win the American election?” “Joe Biden!” she says. We all agree that Biden is set for a landslide, based on the polls. I retire to bed at 11pm to watch CNN, my channel of choice for election coverage, and Twitter is on my phone. I discover that all the British journalists I follow on Twitter are also watching John King and his magic wall. But he and Wolf Blitzer are getting tetchy. What’s going on in Florida? It’s turned midnight and the eyes of the world are on Miami-Dade. John King explains that the Cuban Americans are likely to vote for Trump whose campaign has accused the Biden camp of being socialists. I switch off at 2 a.m. when the state stays red, but can’t get to sleep. How could the polls have got it so wrong?

When I check in with CNN, John King is having a lie down and Chris Cuomo is hosting the election coverage. He’s out of his depth. But it’s already clear that Biden is creeping back with another pathway to the presidency without Florida. I’ve been invited to the seaside by two friends who’ve included me in a social “bubble” so that I won’t be lonely during Lockdown 2. It feels like normal life there. I arrive in time for dinner in a Brighton restaurant where every socially distanced table is taken. When we leave, the centre of Brighton is heaving with pre-lockdown revellers, and police are trying to control masses of people crowded into one street. When I go to bed, Michigan and Wisconsin have been projected for Biden. John King is explaining that despite the early vote count in Pennsylvania being for Trump, the mail-in ballots are expected to be overwhelmingly for Biden, particularly in the cities. Nevada, Arizona and Georgia are also in play, according to CNN Key Race Alerts. It’s another sleepless night.

Lockdown 2 has arrived. My Twitter feed is full of witticisms about John King. “It’s been 12 hours since we saw John King. Can we just take him a coffee and make some noise outside his door?” says one. I go for a long walk in my “bubble” along the South Downs way, in thick mist, and there’s only one conversation. I’ve made a bet with my hosts that Biden will flip Pennsylvania. The battleground states are “too early to call” according to CNN, but Biden is making steady progress in Pennsylvania although Trump still leads. That night we watch The Reluctant Fundamentalist on TV. I retire to bed to check the news headlines: Trump speaks just before midnight. I’m stunned by his petulant accusations about vote stealing. Jake Tapper, who looks exhausted, shakes his head and says, “so sad. Pathetic.” Anderson Cooper goes further, he says Trump is like “an obese turtle on its back, flailing in the hot sun, realising his time is over. But he just hasn’t accepted it, and he wants to take everybody down with him, including this country.”

I return to London and enforced solitude. I’m 20,000 words into my latest novel but haven’t written a word all week. I’m in a small Silent Zoom daily writing group and one member checks in from Long Island. We discuss Trump’s outburst. I switch on CNN to discover that Georgia has ordered a recount. But it doesn’t matter. Biden can still get the 270 electoral college votes to win even without Pennsylvania if he can take Arizona (already called early for Biden by Fox News) and Nevada. But if Trump can’t hold Pennsylvania, with its 20 electoral votes, his presidency is doomed. “No need to rush the count, no need to deny the math,” says John King in the face of a barrage of tweets from Trump saying STOP THE COUNT. Tensions are boiling over in the streets with Count Every Vote protests facing off against Trump supporters.

Every official interviewed on CNN is being asked how long before we get a result? A Biden victory is now inevitable. It’s a sunny day and I go for a walk on Hampstead Heath with a friend, which is allowed under lockdown rules. She knows a “secret” lane to avoid the crowds. I realise that other friends live on this street. Shall we knock on the door? In London, social etiquette is to book an appointment sometimes months ahead because of people’s busy lives. We ring the doorbell, and of course they’re in. I want to give them a hug, but it’s not allowed, so I pat their dogs instead. My friend and I are walking back over the heath at dusk when my phone goes mad. She’s got alerts from the New York Times and Washington Post. Biden is president elect after winning Pennsylvania, and I’ve won my bet! I want to hug my friend but we remain socially distanced. There’s a whiff of marijuana as we walk past groups of people settling down to watch the sunset over London. My friend asks whether I’d like a celebratory glass of wine in her garden, even though we know we’re not supposed to in Lockdown 2. Throwing caution to the wind, we sit outside in the cold with some crisps and olives and, of course CNN on her laptop. It’s still only 6 p.m and my friend and I aren’t allowed to go inside together. I return home to watch the pictures of Americans spontaneously dancing in celebration, and feel very alone.

“Welcome to the operating room,” says the manager of my hair salon with a smile as I step inside. 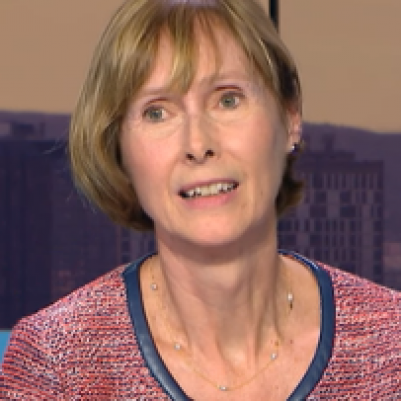